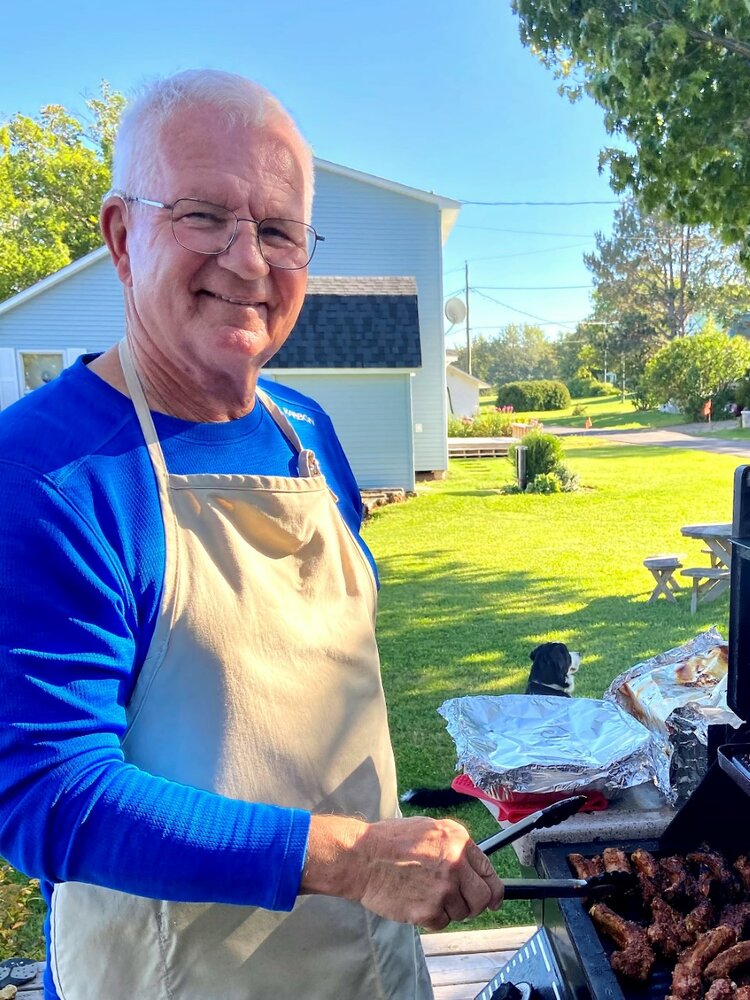 It is with great sadness that the family of Duncan Neill Campbell, husband of the late Fay Campbell, announce his passing on February 13 at the Dr. Everett Chalmers Hospital following a brief illness. Born in , he was the son of the late Helen and Chet Campbell.

’s early years were divided between the house in and the family cottage at Robertson’s Point. In 1963 he met the love of his life Fay at a YMCA dance. Married in 1966, they were soon joined by Chris, Andrew and Jill. worked at Tractors & Equipment, while Fay kept the home fires burning. Their house was a constant hive of activity, full of family, lifelong friends and pets.

After an early retirement, dedicated his time to public service, volunteering for countless organizations over the years, including Ducks Unlimited, Atlantic Salmon Federation, Rotary Club and YMCA Fredericton.

Despite suffering childhood hearing loss, never let this slow him down. A cochlear implant later in his life opened up a world of new sounds which he thoroughly appreciated.

took up photography at an early age. A true artist, his talent for capturing people, animals and nature was exceptional. He loved being part of the Ph’Arts club in Jemseg. We will forever cherish his gift of documenting the moments of our lives.

was truly at peace when surrounded by nature and animals, and over the years many dogs, cats, rabbits and songbirds benefitted from his kindness (ducks, not so much). A lifelong learner, he had many interests, including duck hunting, fishing, boating, hiking, snowshoeing, barbecuing, craft beer and bad puns. King of the sticky note, he was never more thrilled than when he discovered a new gadget, which he bought in multiples and shared with a lucky few. He may have missed his calling as an infomercial superstar for the latest car wax, flashlight or cleaning product — most recently, the air fryer.

’s love of history became a personal journey when he joined Ancestry.ca and enjoyed researching his roots and connecting with relations all over the world. This passion extended to visiting cemeteries and taking photos of headstones of long-lost relatives, while Fay waited patiently in the car.

Family and tradition were of the utmost importance to , and his legacy lives on in his children and nine grandchildren. This clan was blessed with many hours spent fishing, boating, and exploring nature with Papa, and he delighted in sharing his love of the outdoors with them all.

was predeceased by beloved wife Fay in 2021 and sister Janet Stevenson. He is survived by Christopher (Stephanie) and Andrew (Karen) of , and Jill (Derek) of . Papa will also be greatly missed by grandchildren Victoria and Elizabeth; Katie, Bailey and Duncan; and Bryson, Payton, Aidan and Reece. Also left to mourn is sister Andrea Dolan of Halifax, brother-in-law Bob Stevenson of Foshay, brother- and sister-in-law Alan and Margaret Edwards of South Carolina, several cousins, nieces and nephews; and countless friends.

Our hearts are broken at the loss of this true country gentleman, this kind and caring soul. Having recently lost Fay, we take some comfort  that he is together with his Luvey.

A Celebration of Life in loving memory of Duncan Neill Campbell will be held Sunday, June 26th from 1 - 3 pm at the Delta Fredericton. Please join us in honouring a wonderful man who is greatly missed.

The family is indebted to Duncan’s many friends and neighbours who provided support. Thanks also to the staff of DECH ICU, CCU and Palliative Care units for their kind and compassionate care, along with Rev. Jane Johnson.

In lieu of flowers, donations in ’s memory can be made to Heart & Stroke NB, the Canadian Cancer Society, Ducks Unlimited Grade 4 Wetland Field Trips, or the Chalmers Foundation -Palliative Care Unit. Personal condolences may be offered through www.yorkfh.com

Share Your Memory of
Duncan
Upload Your Memory View All Memories
Be the first to upload a memory!
Share A Memory