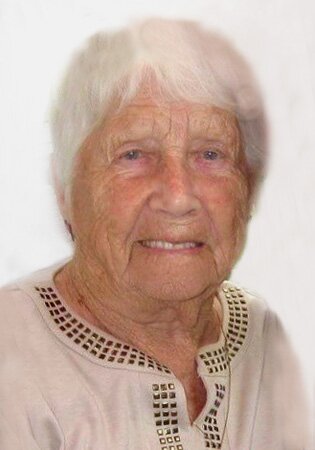 The passing of Idora Janette “Jan” Barr of Fredericton, NB, wife of the late Charles Barr, occurred on Monday, September 6, 2021 at Pavillon Neill Hall- Shannex, Fredericton, NB.  Born on September 24, 1921, in Springfield, NB she was the elder daughter of the late Richard and Edna (Parkhill) Foster.

Growing up, Jan moved many times, throughout the Maritime provinces. While serving in the army, she met her future husband, Charles. They married and settled in Montreal, Quebec for 34 years. Following Jan’s retirement, they moved to Ottawa, Ontario and later, Sussex, New Brunswick, where they spent 30 happy years. Jan’s wanderlust did not stop there. She and Charles travelled across Canada, spent many winters in Florida and toured many of the United States.  Jan also journeyed to Bermuda, the Caribbean, Mexico, and across Europe and Great Britain with family and friends.

Jan loved their cottage on Grand Lake and would often be found planning and enjoying Toga parties, Cabbage Patch Doll birthday parties, family reunions, summer Christmas activities and all manner of creative events – bringing people together for fun and laughter.

She was a firm believer in the power of education and promoted it at every opportunity.  She was proud to be a graduate of the Provincial Normal School, Fredericton, NB and received her Teacher’s License in 1942. Jan loved teaching and would often reminisce about her students, colleagues, and memorable occasions during those years. She taught for many years with the Montreal School Board, specifically in Bronx Park Elementary and LaSalle High Schools. In 1970, she received her BA from Sir George Williams University, Montreal, Quebec

Jan was a member of the United Church of Canada and the United Church Women’s organization.  She was a veteran of WWII, having served as a Sergeant with the Canadian Women's Army Corps.  She was a long- time member of the Royal Canadian Legion Branch # 20, Red Hat Society, 2 Sussex Art Clubs and the Sussex and Area Senior Centre.  Her love of art extended beyond her own painting to an enjoyment of art museums, art making throughout history and emerging artists and makers. Jan volunteered with numerous organizations over the years and would immerse herself in organizing and participating in fund raising events.

Jan loved people and was always interested in their stories. She had a very inquisitive mind and lived life to its fullness.

Visitation will take place at York Funeral Home, 302 Brookside Drive, Fredericton, NB on Thursday, September 9, 2021 from 2-4 pm.  Masks will be required.   A Private Family Graveside Service will take place in the Red Bank Cemetery, Chipman, NB.  For those who wish, donations may be made to the Royal Canadian Legion or to a favourite charity.  Personal condolences may be offered through www.yorkfh.com