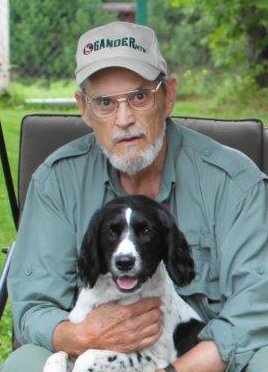 The passing of James "Jim" Fraser Weaver, husband of Joan (Gulliver) Weaver of Doaktown, NB, occurred on November 24, 2020 at .  Born on October 15, 1941 in , he was a son of the late Robert and Hilda (O'Donnell) Weaver. Jim graduated from Teachers College and received a Bachelor of Teaching and in Education from UNB. He taught in , Pangnirtung and Iqualuit, NU and . His teaching philosophy centered on bringing the outdoors into his classrooms and his classrooms to the outdoors. As an avid outdoorsman, Jim started on the shores of the Miramichi before spending 31 years in and , most of which he spent navigating the . Simply put, he had the will, strength and skills to go where others couldn't, experiencing some of the most miraculous places and animals in North America, especially hunting the mighty moose and the finesse of Miramichi fly fishing.

In addition to his loving wife of 54 years, Jim is survived by his daughter, Sharon Hayes (Shane) of Thunder Bay, ON; son, Kevin Weaver (Jaylene) of Lakeville, MN; grandchildren, Dylan, Quinn, Grayson and Barrett; brother, Edwin "Mac" Weaver of Spences Bridge, BC; several nieces, nephews and cousins; and his best canine friend, Willow.

Besides his parents, he was predeceased by his brothers, Glen and Stanley Weaver.

Arrangements have been entrusted to the care of York Funeral Home's Miramichi Valley Chapel. A Graveside Service will be held on Saturday, August 14, 2021 at 2 pm in St. Andrew's Anglican Cemetery (Clay Hill) with Rev. Neil Osiowy officiating. For those who wish, remembrances may be made to New Brunswick Lung Association, Canadian Cancer Society or a charity of the donor’s choice.  Personal condolences may be offered through www.yorkfh.com