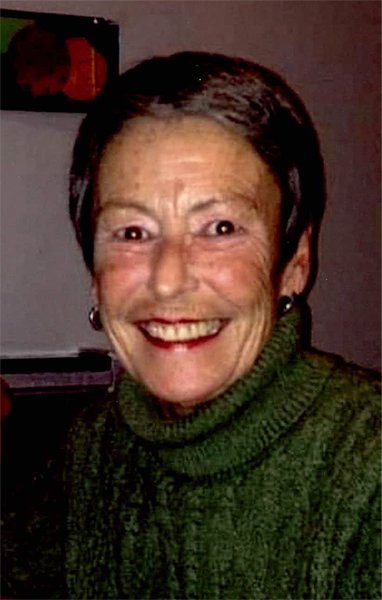 Joan Gamble died on August 29th, 2020…..and wanted people to know that she was comfortable with the choices and decisions she made in leaving this world.

Joan’s irreverent humour and smarts will never be forgotten.

She lived her life the way she wanted to and did so with her quiet values and priorities aligned with what she felt was most important. Although she graduated from Queens University which resulted in a  long career in Nova Scotia and New Brunswick as both a front line nurse and later, as a nurse manager with the provincial government, and following that, with VON,  her happiest times in health care were while she was in public health in Boiestown. Her true love however, was when she left Nursing and discovered her talent for quilting and crafts which displayed her pristine and meticulous handiwork. She and Steve were happiest living in their house in Penniac which, under Steve’s expertise and Joan’s support, became a home. And while, shattered with Steve’s untimely death, Joan was managing to rebuild her life when a diagnosis of cancer took hold. And, as only Joan can do, she was courageous in her decision making and in her own words, felt good about her final wishes as she said her goodbyes and reconciled the premature and abrupt end to her life.

A Private Family Service will be officiated by family friend, Rev. Wilfred Langmaid, however a Celebration of Joan’s life will be held at Duck’s Unlimited on Union Street on Friday, September 4th at 3 pm.  For those wishing to make a donation, Joan requested that Hospice be remembered. Personal condolences may be offered through www.yorkfh.com

Share Your Memory of
Joan
Upload Your Memory View All Memories
Be the first to upload a memory!
Share A Memory
Plant a Tree