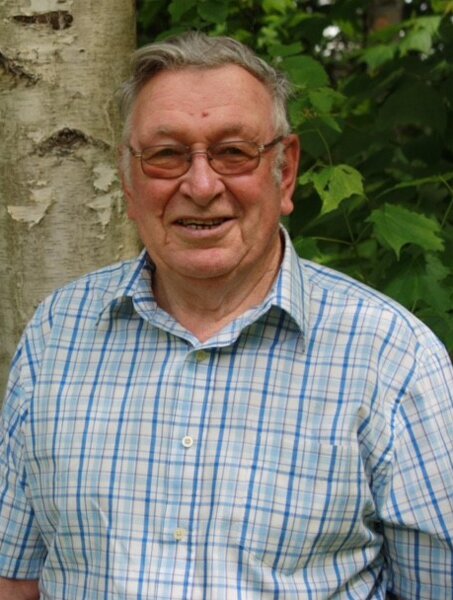 Please share a memory of Merle to include in a keepsake book for family and friends.
View Tribute Book

At Neill Hall, Shannex in on Sunday, September 4, 2022, Merle Allison Sharpe passed away at the age of 94; husband of the late Florence Lenore Sharpe (Jones). Born in Scotch Settlement April 5, 1928, he was the oldest of 9 children of Arthur and Vera (Brewer) Sharpe. Merle was a proud and dedicated family man who always looked forward to having a grandchild by his side, whether it was under the hood of a vehicle or on the tractor at the lake. He was an avid gardener and took pride in the various ribbons and trophies he collected over the years from the FREX and Queen’s County Fair. He was a shining star with The Fredericton Garden Club for many years, sharing his wealth of knowledge for successful gardening. He was well known for his giant sunflowers, flower baskets and also his abundance of vegetables which he shared with family and friends. He took pride in passing down his green thumb to his 3 daughters who will continue that legacy.

In his early years of marriage, he worked on many farms alongside his loving wife. After obtaining his automotive license he worked for many years in that industry, ending his career repairing school busses with the Department of Transportation. Retirement allowed him more time for hobbies, family, friends and his camp at Whites Cove.

There will be no visitation by request of the family. A private graveside service will be held. In lieu of flowers, contributions to Scotch Settlement Cemetery or The Fredericton Garden Club in memory of Merle would be appreciated by the family. York Funeral Home has been entrusted with the arrangements. Merle’s family would like to thank all the wonderful and caring staff at Neill Hall for the excellent care they have provided. Personal condolences may be offered through www.yorkfh.com

Look inside to read what others have shared
Family and friends are coming together online to create a special keepsake. Every memory left on the online obituary will be automatically included in this book.
View Tribute Book
Share Your Memory of
Merle
Upload Your Memory View All Memories
Be the first to upload a memory!
Share A Memory
Send Flowers