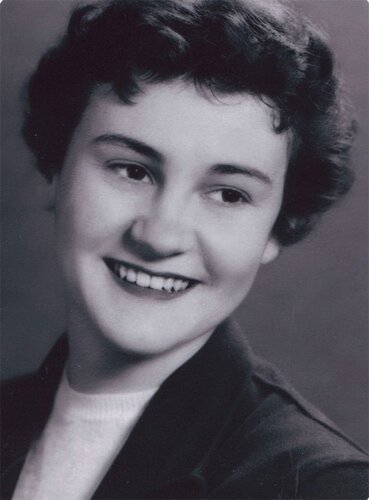 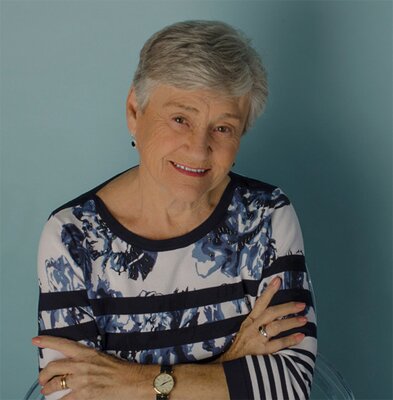 The final verse of the Ballad of Lloyd and Thelma concluded with Mom’s passing on May 25th, 2022. Fun loving, outgoing and kind to a fault, Thelma Augusta Demmings succumbed to her illness surrounded by her family, the thoughts and prayers of those who knew her and the spirits of those gone before.

Born on August 17th, 1936 and growing up in bustling Chipman, NB during the 30’s and 40’s, was to enjoy the fruits of close community friendships, endless outdoor activities, nurturing her love of animals and young love. Playing in her playhouse by the Brick Plant Road, winter skating on Salmon River, writing to her pen pal Helen, and cheap tickets to see her favourite flicks at her uncle’s theatre were but a few of the benefits of living in a small town.

After graduating from high school, Mom entered the nursing program at Saint John General Hospital, Saint John NB. But long distance love could not be denied. As the result of young and determined courtship, Lloyd and Thelma were married in 1956. As per the norm of a 1950’s housewife, Mom followed Dad’s career from the early days at Eaton’s Department Store in to Chrysler in , and .

The 50’s and 60’s were decades of energy and growth. The couple of two became a family of five with pets and numerous house moves in tow. Mom was the quintessential 50’s/60’s housewife dutifully taking care of all matters on the home front while Dad worked and travelled at his job. It was not all work and no play. Mom was an excellent bowler and played in a women’s league for years, joined a bridge group in which she would go on to play for five decades, became the queen of puzzles, couldn’t pass on a good book and loved to dance! In those days, it was not unusual for them to get a sitter and go out dancing at least two weekends, if not more, per month. They were a great dancing team.

The 70’s and 80’s provided a different era for Mom. With her kids becoming independent adults and firmly settled in , the home front had quieted down. It was at this time that she decided to enter the work force. She started by volunteering at the Fredericton High School Library and working part time at Towers Jewelry and Towers Luggage and Leather in the Fredericton Mall. Eventually, she secured a position at the FHS library and worked the literary stacks with her librarian sidekicks Linda, Cynthia and Mary until her retirement in 2000.

Being by the water is what made Mom the happiest during many of her working years and well into her retirement. Whether it was Shediac, , Scotchtown, or Buchtouche, these locations put her into her happy place. It is also

where she forged some of her greatest and most long lasting friendships. The Moncton/Buchtouche Six (the Drydens and Lebans) and the Scotchtown Six (the Gills and Gilbeys) provided Mom with endless laughs, connection and fabulous food.

As Mom’s condition started to make itself known, it was determined that we would need to spend as much time with her as possible. This could not have been done without the assistance of Mom’s guardian angels, Connie Demmings (big sister), Penny Demmings (little sister), Linda Murphy and Carole Rowe. Thank you ladies, your help was immeasurable and greatly appreciated by the family. You were in it for the long hull and we thank you.

To all of Mom’s great neighbours of , your ongoing friendship and support meant the world to her.

To the nurses at Extra Mural, specifically Krista Eveleigh, thank you for all the visits and assistance, especially during a pandemic! You folks are wonderful.

To the nurses on 4 at the Chalmers: Mom’s stay was brief but we appreciate all that you did for her.

Last but not least, to Dr. Stephane Paulin, who niftily and gently guided us through the phases of Mom’s health care. The recognition of diagnoses, next steps and patient-centered care, and your congenial and wise counsel throughout Mom’s health journey, the family is eternally grateful. To the folks of Fredericton Hospice, who made Mom’s last days a most congenial and warming experience, thank you for the fabulous care our mother received from her medical team on site!

In addition, Mom is survived by many extended relatives of both the Wasson and Demmings clans.

The family wishes to invite relatives and friends to a celebration of life to be held at the Kingswood Resort, , on Sunday, June 5th from 2 to 5 pm. A private family committal will take place at a later date.

In lieu of flowers, donations to Fredericton Hospice, the and/or Oromocto SPCA or a charity of the donor’s choice would be humbly appreciated. Personal condolences and offers of charity may be made through the York Funeral Home via www.yorkfh.com