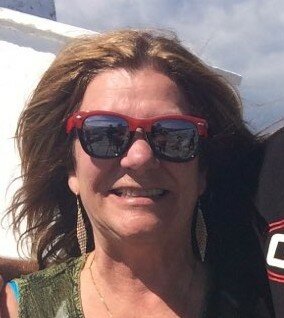 The passing of Helen Theresa West of Minto, NB, wife of Gordon Thompson, occurred on Tuesday, April 19, 2022 at the Dr. Everett Chalmers Regional Hospital.  Born on June 18, 1954 in Miramichi, NB, she was the daughter of Edward Martin and the late Irene (Duguay) Martin.  Helen worked at the Omega Restaurant in Minto, NB; she was noted for her crocheting abilities and gifted hats to the Minto Elementary School.  Helen enjoyed her trips to the Minto Food Bank.

In addition to her husband, Helen is survived by step daughter, Kelsey Patterson; step grandson, Michael Patterson; siblings, Stephen Martin (Lori), Betty Woods, Kenny Martin and Doris Martin (Donnie); several nieces and nephews and many friends. Besides her mother, she was predeceased by her brother, David Martin; and her first husband, Aubrey West.

There will be a Private Graveside Service in Sunny Bank Cemetery, Fredericton, NB at a later date. In lieu of flowers, remembrances may be made to the Minto Food Bank or the charity of the donor’s choice.  Personal condolences may be offered through www.yorkfh.com

Share Your Memory of
Helen
Upload Your Memory View All Memories
Be the first to upload a memory!
Share A Memory
Send Flowers