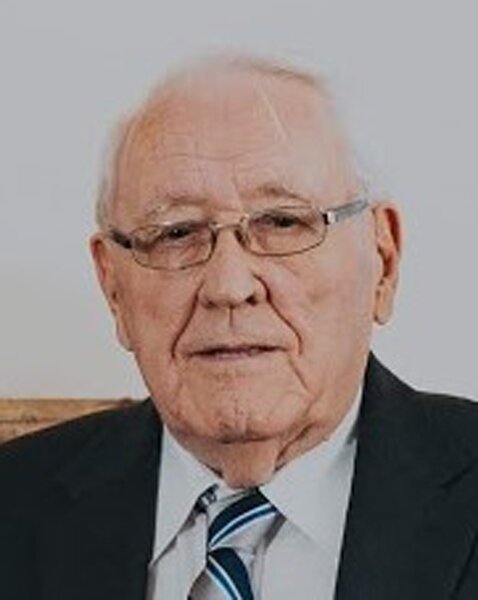 Albert Reuben Cowperthwaite passed away on February 28, 2022 at Fredericton Hospice House after a period of declining health over the last year.

He was born on January 26, 1930 in Durham Bridge, NB to the late Reuben and Edna (Clowater) Cowperthwaite.

Albert grew up in Durham Bridge, NB and attended high school and Business College (Accounting) in Fredericton, NB. Later in life he would go to Queen’s University for an executive management course. He started work at Capital Co-operative and worked there for 25 years, starting in accounting and working up to General Manager. Following that, he started on his business endeavors with D&J Drive In restaurant and then Betty Brite Dry Cleaners. He also was Manager of the Fredericton office of Supply and Services Canada for a number of years. His business ventures expanded with the Cowperthwaite Apartment Rentals business that culminated with 685 units with over 40 buildings. Albert was honest, hard-working and very smart, which led to success in each of his work and business ventures.

Albert married Grace on August 23, 1950 in Fredericton and they were married for 63 years until Grace’s passing in 2013. They had a son, David and daughter, Janice and those years were focussed on work, family visits and trips throughout the Maritimes and eastern U.S. Albert and Grace were partners in business and family life and they later enjoyed many trips throughout the southern U.S.

Albert is survived by his son David (Catherine) Cowperthwaite of Fredericton, NB, daughter Janice Knoechel of Calgary, AB; brother-in-law Lanny MacPhail of Toronto, ON and sisters-in law Neola Cowperthwaite and Gracie Mersereau of Fredericton, NB and Vera Mersereau of Blackville, NB; grandchildren Alex (Jane Park), Brad and Emily Cowperthwaite, and Paul (Carolyn), Ben (Candice), and Anne Knoechel; great-grandchildren, Bennett, Chloe, Heidi and Samuel Knoechel and Parker Cowperthwaite, as well as nieces, nephews, other relatives and friends. He is also survived by his caregivers and special friends Bonnie and Tim Brewster.

A Memorial Service will be held from York Funeral Home’s T. Gordon MacLeod Memorial Chapel on Thursday, March 10, 2022 at 2 pm with Rev. Greg Geldart officiating.   The service may also be viewed through the funeral home’s website.  Please register with the link at the top of the obituary.  Interment will take place at a later date. In lieu of flowers, remembrances may be made to the charity of the donor’s choice. Personal condolences may be offered through www.yorkfh.com