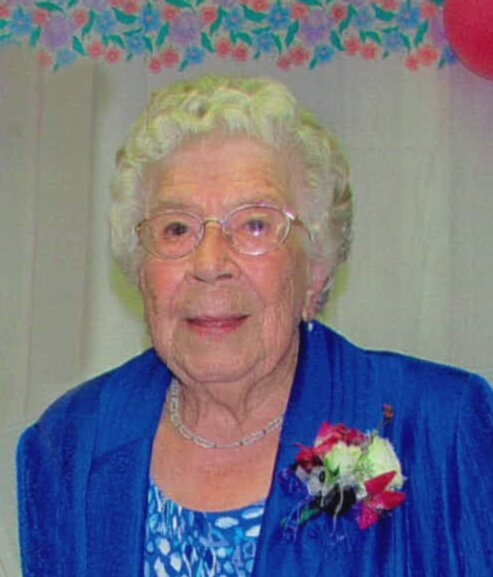 Obituary of Hilda May Haines

With sad hearts, we announce the passing of our mother Hilda May (Sharpe) Haines on January 26, 2022. However, we rejoice that her suffering is over and she has joined our father Raymond (2015) to dwell in God’s presence.

Mother was born August 28, 1924 in Upper Hainesville to Emma May (Ingraham) and Nelson Sharpe. She taught school in several communities before marrying our father Raymond in 1946. For 57 years of their marriage they resided in Keswick (Douglas) where she gave her time and talents to the raising of her 4 children and working as a part-time caregiver to a number of seniors in her community. She and Raymond enjoyed the fellowship of other seniors in at least 3 local seniors’ groups. She also served as a Sunday school teacher and choir member in the Churches of Christ in Burtts Corner and Dorn Ridge. She was a long-time member of the Burtt’s Corner Church of Christ Sewing Circle, attending weekly until after her 90th birthday and subsequent move to Moncton in 2015. During her time in Moncton, she attended Highfield Baptist Church as long as her health allowed. Hilda was a woman of faith and prayer - she was very passionate about her love for God, her desire to share her faith, and the love for her family. She enjoyed the time she spent with her 9 grandchildren and 6 great grandchildren. When visiting was not possible, she studied their pictures and delighted in the stories we shared with her.

Hilda is survived by and missed by her 4 children: Dale (Wendy) of Rothesay, NB; Frank (Beverly) of Lower Coverdale, NB; Audrey Michaud (Gerard) of Oak Point, NB; and Perry (Katherine) of Fredericton, NB.

The family wishes to express their many thanks to the staff of Moncton Residence for the excellent care of Mother over the past 7 years.

Arrangements have been entrusted to York Funeral Home, 302 Brookside Drive, Fredericton. A Graveside Service will be planned at a later date. In lieu of flowers donations may be made to Maritime Christian College, Charlottetown, PEI; the Burtt’s Corner Cemetery; or to a charity of the donor’s choice. Online condolences may be made through www.yorkfh.com