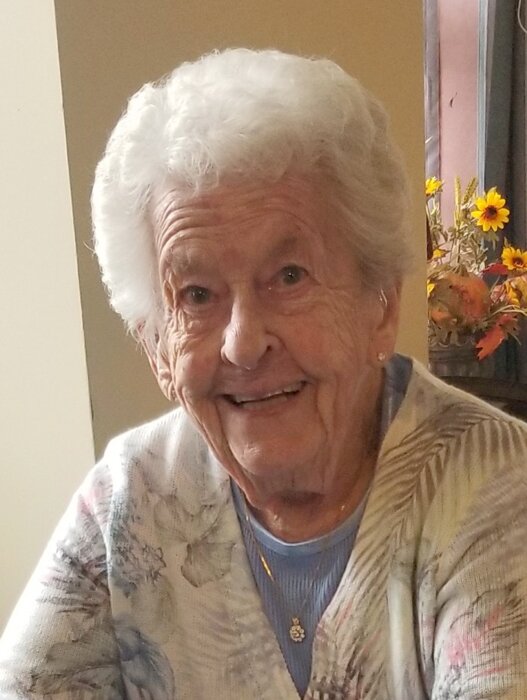 We are deeply saddened to announce the passing of our beloved mother, Betty Hawkins of , on Wednesday, November 3rd, 2021.

Mom was born in in 1926.  She had a happy childhood, loved playing tennis and spending summers at the Isle of Man.  When the 2nd World War struck, she like other Londoner’s were affected by bombings, blackouts, rationing and traveling around the city on her bicycle and roller skates.  While making beds at the Canadian Red Cross Lodge for Canadian Service Men, she met the love of her life, our dad, Ken Hawkins.  Dad was with the First Canadian Parachute Battalion, who participated in the of the Bulge. After a short courtship and marriage, dad’s troop was sent home and mom, now a War Bride did not arrive at Pier 21 in until March of 1946.

They moved to the family home in and had a very simple and happy life, raising us children: Ray (Sandra); Sharon (David); Wendy (Malcolm); Kelvin (Terry); Gail (Randy); Brian (late Dianne) and Glenn (Ellen).  We had a wonderful life and grew up playing outside, sliding on the hill and swimming in the creek, and often got “oyed” for our misadventures.  Mom was also blessed with several loving grandchildren and great-grandchildren, some of who she only saw on occasion.

Mom is predeceased by our father, Kenneth Edward Hawkins (1990) and a son, Terrance Michael (1958).  She was the last remaining member of the Akhurst family of , , predeceased by her parents and Leonard, brothers Leonard, Ray and Alex and her sister Phyllis.

Mom was a member of Anglican Church in Nashwaaksis.   Mom thoroughly enjoyed her involvements with the Fredericton War Brides group and entertaining at various venues with the Singing War Brides. She also enjoyed lawn & carpet bowling; gardening, knitting; playing Scrabble and doing the daily crossword puzzles.   After us children were grown, she volunteered at the Veteran’s Wing at the and was a member of the Hospital Auxiliary.  In 1992 mom was honored with the Governor General’s Commemorative Medal For the 125th Anniversary of The Confederation of Canada.

There will be no visitation or funeral service, as per mom’s wishes.  A private family Celebration of Life will take place at a later date. Donations in her memory can be made to the SPCA or to a charity of the donor’s choice. Arrangements are entrusted to York Funeral Home. Personal condolences may be offered through www.yorkfh.com

Mom, you are at peace now.  The house on the hill will never be the same.  We love you and miss you now and forever.

Share Your Memory of
Betty
Upload Your Memory View All Memories
Be the first to upload a memory!
Share A Memory
Send Flowers