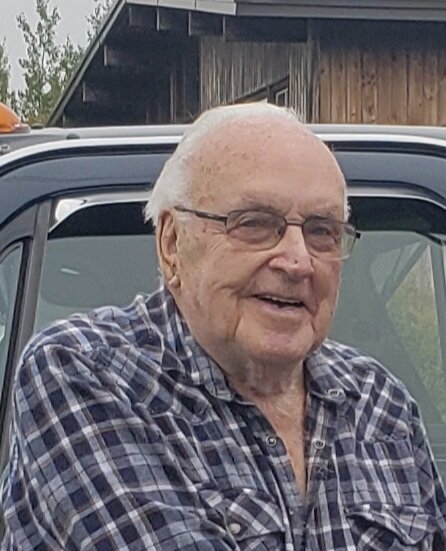 It is with heavy hearts we announce that Hartley Ralph Jones, 87, of Noonan passed away on October 24, 2021.  Born in Lincoln, Maine on December 31, 1933, he was the son of  the late Murvyle and Bertie (Crabbe) Jones.  He is survived by his wife of 66 years, Florence (Harris) Jones.

He worked many years for Irving Oil hauling a gas tanker over the roads of New Brunswick.  He later worked for Gorman Construction and Caldwell and Ross.  After retirement he enjoyed his woodworking shop.  Many years were spent camping.  The past 21 years they enjoyed their seasonal lot at Alder Haven solving many of the worlds’ problems around the campfires with their many long-lasting friendships there.

He was predeceased by his son, Danny Jones (2011); his sister, Phyllis Watson and his brother, Winfred Jones.

We would like to thank Dr. McCann, the many Doctors, nurses and support staff at 4 NW, Palliative Care and Hospice. Dad suffered from COPD.  Even with all the turmoil in our hospitals and city, you all made his final days comfortable.  That’s all anyone could ask for, Thank You so much!

Arrangements are in the care of York Funeral Home, cremation will take place.  There will be no funeral service or visitation. For those who wish, remembrances may be made to the Hospice House Fredericton. Personal condolences may be offered through www.yorkfh.com

Share Your Memory of
Hartley
Upload Your Memory View All Memories
Be the first to upload a memory!
Share A Memory
Send Flowers