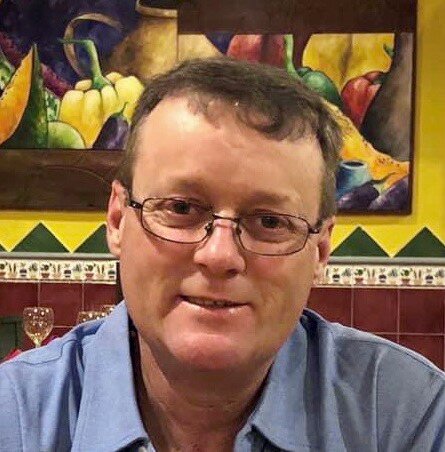 Brent White died suddenly but peacefully with loved ones by his side on Friday, September 10, 2021 at his home in Killarney Road, NB.  He was 56 years of age.  Brent, a former resident of Marysville, NB, was the son of the late Winston White and Beverley White.

He will be lovingly and forever missed by his spouse, Tessa (Walsh); mother, Beve (MacPherson) White; stepmother, Jane White; sons, Brad White and Matt Estey; sisters, Tracey Grasse (Scott); Barbi Litalien (Mike); Patti Morrison (Jim); brother, Kirk White (Amanda); and several nieces and nephews.  He will also be missed by his many extended relatives and friends. In addition to his father, Winston White, Brent was predeceased by his brother, Brad and his sister, Heather.

Brent worked as a senior site superintendent for Simpson Building Contractors for 30 years.  He was dedicated to his career.  During his free time, he and Tessa liked to be at home with their dog Fenway and cat Spirit; travelling, especially to one place in the Caribbean and spending as much time as he could at their place at Bay du Vin Beach.  Brent also enjoyed time spent with family during Sunday afternoon dart games.  It gave him the chance to return to ‘The Ville’.  If you knew Brent, you knew he was an avid sports fan, in particular, a Montreal Canadiens and Boston Red Sox fan.

Brent will be greatly missed and forever in the hearts of those who had the good fortune to know and love him.

Visitation will be held at York Funeral Home on Wednesday September 15, 2021 from 7 to 9 pm. Funeral service will be held from York funeral Home’s, T. Gordon Memorial Chapel on Thursday September 16, 2021 at 2 pm. For those unable to attend the service, it can be viewed by registering through the Funeral Home’s Website (Click on the link in Brent’s obituary). For those who wish, remembrances may be made to Pancreatic Cancer Canada.  Personal condolences may be offered through www.yorkfh.com