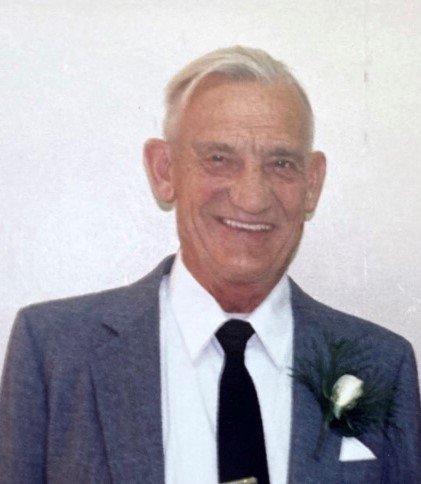 The death of Garnet Holland of Fredericton, husband of the late Elizabeth “Betty” (Bailey) Holland, occurred on June 16, 2021 at the Dr. Everett Chalmers Hospital. Garnet was born on August 16, 1927 in Barkers Point.  He was the son of the late Oliver and Tressa (Jordan) Holland. Garnet left school in Grade 7 to work in the woods with his father.  He later drove his own truck to haul gravel for the construction of Base Gagetown.  He went on to be a truck driver/equipment operator for NB Power and retired after 30 years of service in 1989.

Garnet is survived by his daughter Gina Thibodeau (Bob) and grandchildren Katie (Jordan), David and Jamie (Brett and son Tallen). He is also survived by daughter-in-law Anne and grandchildren Josh and Jodi (Ben), and great granddaughters Shiona and Hailey.  He is survived by brother Merritt and four sisters Lillian Wilson, Annie Harris, Doris Jamieson, and Joyce Greer and several nieces and nephews. In addition to his wife, Garnet was predeceased by his son Keith and brothers Howard, Hartley, George, and Weldon and sister Florence O’Neill.

He was a self-taught mechanic and if he wasn’t covered in grease and the smell of diesel fuel it wasn’t a productive day. Garnet was a great story teller and if you sat down beside him, he would tell you the story of his life.  Even after all his years of telling stories he would always have a new one to entertain the listener.  His favorite place was his woodlot. He would sit beside the pond when there was no one else around and he said that is where he felt at peace.

Internment will take place in Sunny Bank Cemetery at a later date. For those who wish, remembrances to any charity of the donor's choice would be appreciated by the family. Personal condolences may be offered through www.yorkfh.com