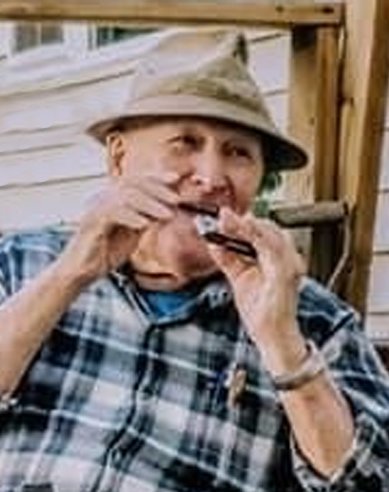 The family of the late Mannie Alfred Lyons announces his passing on June 8, 2021. A kind man with a big heart with great love for all his family, willing to listen to anyone who needed an ear and help in any way he could. One of his biggest passions was spending time with the many children that came with being a part of the Lyons family – teaching fishing, gardening, fiddlehead picking and just about anything else that was asked about.  If you wanted to know “go ask Uncle Mannie”.  Some of his jobs over the years were school janitor and school bus driver and he enjoyed “his” kids on the bus and at the school.

Survived by his loving wife of 64 years, Barbara (MacLean) Lyons; sons, Dale Lyons (Nan) and Rick Lyons (Margie); son in law, Rodney Estey (Penny); several grandchildren and great grandchildren. Along with the deep sadness of Mannie’s passing there is comfort in knowing that his only daughter, Penny was waiting with arms opened wide to welcome him home.

Born on the banks of the Southwest Miramichi in Doaktown, NB on August 10, 1938 to parents Christina (Arbeau) and Freeman Lyons.   Mannie was the 7th child of which would spend many days playing, laughing, loving, playing music, singing and fishing with his siblings, Lena Palmer, Marvin Lyons (Nancy) and Paul Lyons (Wanda) are the trio remaining of the siblings and sister in law, Joan Lyons (Eldon), also survived by  many nieces, nephews and cousins.  There remains an abundance of friends who will also feel the deep loss of this man’s great presence.

Visitation will take place at York Funeral Home, 302 Brookside Drive on Friday, June 11, 2021 from 7-9 pm.  The Memorial Service will take place at York Funeral Home’s T. Gordon MacLeod Memorial Chapel on Saturday, June 12, 2021 at 11 am with Pastor Rick Bruce officiating. The Memorial Service will be by invitation only.  For those who wish, remembrances may be made to the New Brunswick Heart and Stroke Foundation or the charity of the donor’s choice.  Personal condolences may be offered through www.yorkfh.com