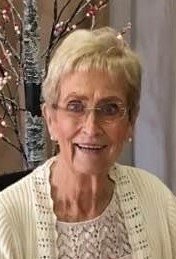 Obituary of June I. Clark

June (nee White) (Richardson) Clark passed away on February 4,2021 at the Dr Everett Chalmers Regional Hospital with her daughter Terry at her side.

Born June 1, 1935, the daughter of late Lawrence “Mike” and Alma (Sharp) White, June grew up in Marysville, NB. It was a hot spring day when she was born and she got her name from the month, as she was expected in May. She was always thankful to have waited, so she didn’t get Cybil instead. She grew up with her sister Nellie and brother Dale.

She married Edward Richardson in October 1953 and together they welcomed three beautiful daughters; Wendy Joyce, Kimberley Anne and Terry Lynn. She and Ed had 10 wonderful years together before he passed away in December 1963.

A few years later, she met Norval Clark at a dance and the rest is history. They married in July 1967 and had two children; Beth June and Norval Lawrence. All of her adventures were undertaken, and challenges overcome, in partnership together with Norval from then onward.  They loved to travel and especially go in the trailer. She was a keen card player and would win most games she played. June loved the heat and the yearly trip to Florida occurred for decades so she could lay by the pool.

June exemplified strong Christian faith and was an active member of her local church.  She and Norval worked in the bus ministry for many years, every Sunday picking up children in the neighborhood to take them to Sunday School and then taking everyone home again afterwards. She also taught Awana at the church and was a regular at Wednesday hot dog day at the school, cooking for the kids.  She was also the bookkeeper for several business with Norval in addition to raising her five children.

Arrangements are entrusted to the loving care of York Funeral Home. Due to current restrictions, a Private Funeral Service will be held from Devon Park Baptist Church on Monday, February 8, 2021 at 2 pm with Rev. Terry Woodcock officiating. The service will be available for online viewing from the church’s Facebook page. Interment will be in Prince William Cemetery at a later date. Remembrances may be made to the Kidney Foundation of Canada or the NB Heart and Stroke Foundation. Personal Condolences may be offered through www.yorkfh.com