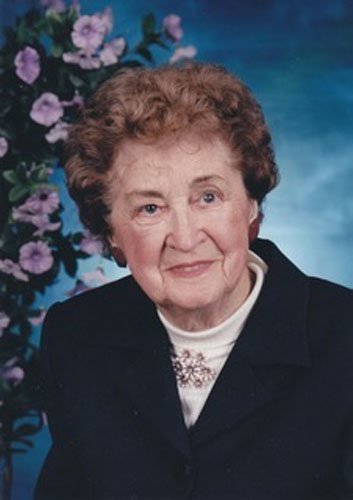 The passing of (Dolly) Byrne of Fredericton, NB, wife of the late Paul Byrne occurred Wednesday, November 18, 2020 at the York Care Centre, , at the age of 99. Born on January 7, 1921 in , she was the daughter of the late Joseph Nicholas and Agnes Kathleen (Maher) Doyle.

Following graduation from High School, she went on to pursue a career in nursing, training at the in and in , where she met her husband, Paul. They were married in 1948 and settled in McAdam, where Paul worked with CP Telecommunications at the Historic Railway Station and Dolly practiced as a private nurse in the offices of several local physicians including Dr. Francis O’Keefe and Dr. Claude Brown. She became very active in the McAdam community, especially with St. Clements’s church. In 1965, the Byrne family moved to and Dolly commenced nursing at the and later, at the Dr. Everett Chalmers Hospital, until her retirement. She was involved in many activities with St. Anthony’s Parish in and was active in St. Anthony’s CWL. She loved to cook and knit, was an avid collector of memorabilia and enjoyed painting and ceramics.

The family wishes to thank the nurses and staff of York Care Centre for their kindness in caring for our mother.

Due to the current public health situation, there will be no visitation. A Memorial Service for the immediate family will take place at York Funeral Home’s T. Gordon MacLeod Memorial Chapel with Father Monte Peters officiating. Interment will take place in . For those who wish, remembrances may be made to the York Care Foundation or a charity of the donor’s choice. Personal condolences may be offered through www.yorkfh.com

Share Your Memory of
Marion
Upload Your Memory View All Memories
Be the first to upload a memory!
Share A Memory
Plant a Tree