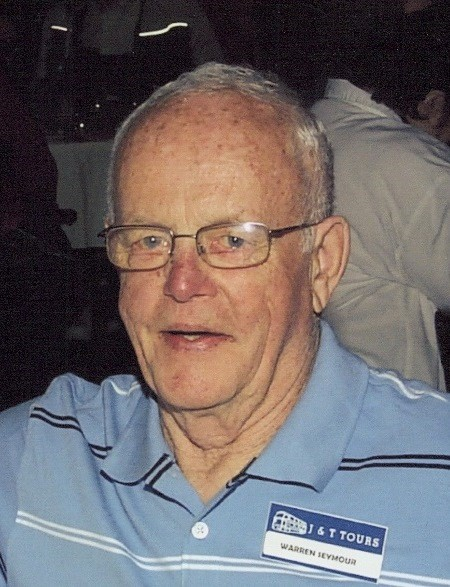 It is with profound sadness that we share the passing of Warren Seymour at the York Care Centre on Friday, May 29.  Warren was born on April 11, 1937.  He was the son of the late Eldon and Mabel (Willis) Seymour, stepson to Ken Rosborough, a proud grandfather, loving husband and father, and trusted and loyal friend.

Warren was born in Fredericton, growing up and marrying Jeanette Saunders in 1955.  They were childhood sweethearts who raised six children in Nashwaaksis.

Warren started work at Thistle Dairies, leaving there 21 years later to begin work with Electric Motor Service.  He was known, by one and all, for his loyalty, high standards and work ethic.  There wasn’t a pump that he couldn’t fix, or a problem that he couldn’t solve, and there was seldom a call for help that didn’t end up in him saying “just give me a few minutes and I will be there”.  He retired from Electric Motor after 30 years of service.

Warren was an avid salmon fisherman and spent many hours on the rivers of New Brunswick and elsewhere. He loved fishing with his children and friends and was in his element in nature producing maple syrup, harvesting wood, gardening and hunting.  He was proud of his time as a Director of the Saint John River Salmon Anglers Association.

Warren was a friend to everyone, and everyone was his friend. He was tremendously supportive of his children, their spouses and his grandchildren.  He never worried about himself, always worried about others, and was renowned for his generosity.

Warren  is survived by his sister Donna Barr (Daryl), his brother Robin Seymour  (Louise), his sister-in-law Deborah Hollingworth, and his six children Janice (Randy), Tim (Andrea), Randy (Karla), Chris (Tammy), Peter (Michelle) and Jamie (Alexia). He was a proud and loving grandfather to 15 grandchildren : Ryan, Matthew, Bill, Michael, Taylor, Racheal, Alaina, and Brooklyn Seymour; Cory and Jeffrey Edwards; Lindsey Desmond; Dillen Theriault; and Hannah, Chris and Ian Ralph.  He leaves behind twelve much loved great grandchildren.  He was predeceased by his wife Jeanette, his parents and stepfather, and his siblings Pearl, Harold, Wendell and Adrian.

Warren lived a wonderful life filled with people who respected and admired him.  He was blessed to have wonderful care from York Care Centre staff over the last two years and the family is sincerely grateful to the excellent team on Tower Two.

Due to the Covid 19 healthcare crisis there will be no public visitation.  A Celebration of Life will take place at a later date.  In lieu of flowers, Warren would be delighted to know that donations were made to the Miramichi Salmon Association.  Personal condolences may be offered through www.yorkfh.com.

Share Your Memory of
Warren
Upload Your Memory View All Memories
Be the first to upload a memory!
Share A Memory
Plant a Tree