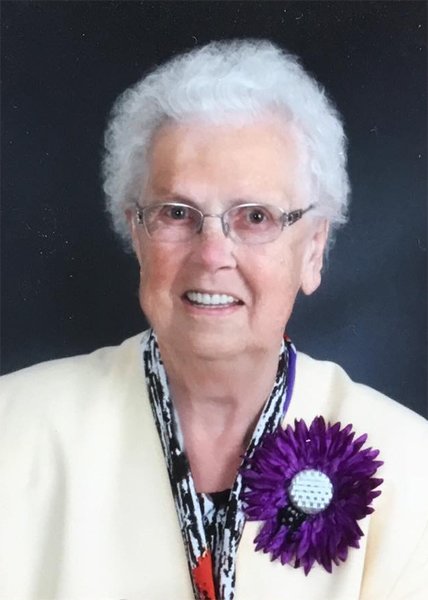 The family of Marguerite Pansy Munn of Fredericton, NB are saddened by her passing on Sunday, February 9, 2020 at Hospice House, , following a short, painful cancer diagnosis. Marguerite was born on July 5, 1927 in , NB to the late Thomas and Lena Arbeau.

In her younger years Marguerite taught school in rural areas of NB and still remembered the names of many of her students. She was employed for a time at Hamilton Cottons in (Marysville) , and retired after 25 years of employment at Bonar Packaging (Barkers Point) Nobody remained a stranger to her for very long. She opened her home and heart to many expectant ladies in the area to spend time and be lovingly cared for during delivery and weeks after the birth of their babies. Many times she fed and clothed neighbourhood children even though there were times she had very little to offer. She continually gave as she saw a need and served her neighbourhood and her church family, expecting nothing in return. She had a sense of humour and could come up with ‘one liners’ in an instant. Her faith in God was firm and strong right to the end and she lived what she believed even through some difficult years in her life.

The family are so thankful for the wonderful care and support given to mum over the years, and especially during the past few months. Sarah Masson has been an absolute angel from the beginning of mum’s cancer diagnosis until God called mum home. We will miss having her around almost as much as we will mum. Barb Peterson came along later in mums illness and was such a blessing, if even for a short time.

Arrangements are entrusted to York Funeral Home. Visitation will be held at on Wednesday, February 12, 2020 from 12 noon to 1:45 with service to follow at 2:00 pm. Interment will be held at the United Pentecostal Cemetery in Doaktown, NB, at a later date. In lieu of flowers, monitory donations would be appreciated to the place she dearly loved - , as well as Hospice House Fredericton, or any charity of the donor’s choice. Personal condolences may be offered through www.yorkfh.com