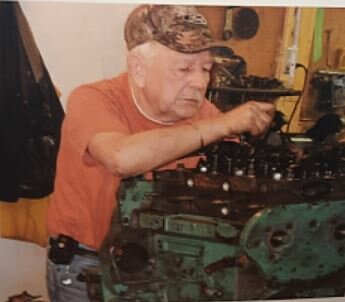 Please share a memory of George to include in a keepsake book for family and friends.
View Tribute Book

The passing of George McCready of Keswick Ridge, NB, occurred on Monday, November 28, 2022 at the Dr. Everett Chalmers Regional Hospital.  Born on July 12, 1943 in Northern Ireland, he was the son of the late William and Susan (Wilson) McCready.

George enjoyed time with his girls and his grandchildren. Being a diesel mechanic, he travelled all over New Brunswick and loved his work. He used to say “if I had a nickel for every mile I travelled, I would be a rich man”. Some of his favourite spots in the province were Deer Island and Saint Andrews, NB where great memories come from. He loved Canada and Ireland both. To him, both were his homes. He taught his girls and grandchildren to be resilient and work hard. He will be remembered and missed by many who knew him. The family would like to thank all the staff on 4NE wing at the Doctor Everett Chalmer’s Hospital for his care.

Besides his parents, George was predeceased by his brothers, Samuel and Norman McCready.

In keeping with George’s wishes, there will be no visitation or service. For those who wish, donations may be made to the Alzheimer Society of New Brunswick or to the Victorian Order of Nurses.  Personal condolences may be offered through www.yorkfh.com

Share Your Memory of
George
Upload Your Memory View All Memories
Be the first to upload a memory!
Share A Memory