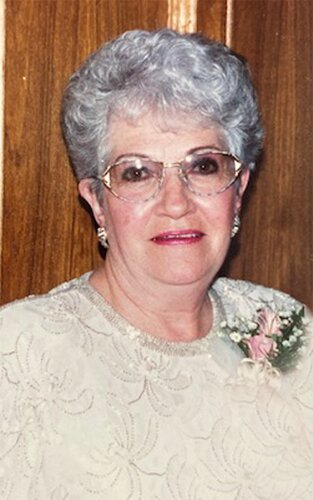 Please share a memory of Bertina to include in a keepsake book for family and friends.
View Tribute Book

It is with heavy hearts we announce the passing of our beloved Mom, Bertina Barrett, wife of the late Joseph E. Barrett, which occurred Tuesday September 20, 2022, at Dr Everett Chalmers Regional Hospital, Fredericton.

Born in Halifax NS, on February 6, 1930, she was the daughter of George and Doris (Gratham) Norris.

Besides her husband and parents, Bertina was predeceased by her brothers Herbert, and Aubury and sisters Madeline, Vera and Mildred.

She was a stay-at-home Mom, and coming home from school to the smell of homemade bread and hot chocolate was a weekly occurrence, how lucky were we.  In 1973 she began working side by side with Dad at their business, Aries Optical in Fredericton, until she retired.

Mom loved company to drop in, especially the grandchildren. Her words "Sit down, you're hungry", were heard by them all, which meant sandwiches and cookies were about to appear. She was famous for her meat pies at Christmas time, getting one of those was the best gift ever.

Cooking, quilting, dancing and travel were some of her favorite past times. She was a wonderful Mom and Grandmother and will be dearly missed.

A Funeral Mass will be celebrated Tuesday, October 11, 2022 at Saint Theresa Catholic Church at 11 am. Father Maria Arokiam Chinnappan as celebrant. A reception in the church hall to follow. Interment will take place at St. Anthony's Cemetery.

A special thank you to the Emergency Department at Chalmers Hospital for the wonderful care Mom received in her final hours and to Eden Villa Retirement Home.

For those who wish, remembrance may be made to Dr. Everett Chalmers Hospital Foundation or charity of choice.