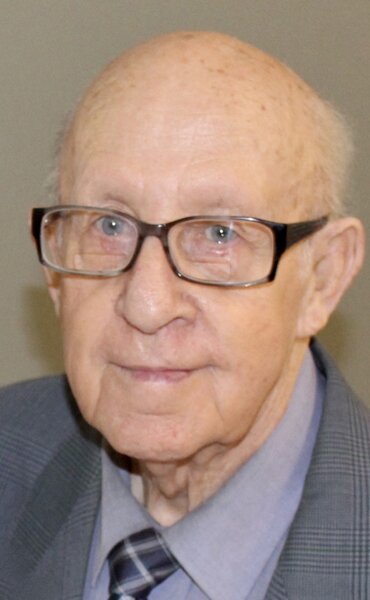 Please share a memory of Stewart to include in a keepsake book for family and friends.
View Tribute Book

The passing of Stewart Allan Harding, age 93 years of , , formerly of , , and , loving husband of Wanda (Warman) Harding occurred on Thursday, January 5, 2023 at ’s , .  Born in Lower St. Mary’s, NB, he was the youngest son of Mary Ann (Stewart) and Henry “Harry” Harding.  He farmed with his father for many years, attending the market at and later the Boyce Market; he then went to work for NB Liquor from which he retired in 1986, after 35 years, the last ten years as Manager in   He and his wife, Wanda, moved back to Marysville to retire and enjoy his love of gardening and the cottage at .  He was a member of the and a former member of the I.O.O.F. and the Lions Club. Stewart and Wanda moved to to be close to their family in 2019.

Stewart is survived by his wife of 69 years, Wanda (Warman); three sons, Alan and wife, Martha of Bedford, NS, Stephen and wife, Jennifer of Dartmouth, NS and Joseph and his wife, Kelly of Thunder Bay, ON; six grandchildren, who were the joy of his life, Rachel Wearing (Rob) of Dartmouth, NS, Dr. Alison Harding of Halifax, NS, Andrew Harding (Sydni Jardine) of Dartmouth, NS, Cameron Harding of Dartmouth, NS, Collin and Myles Harding both of Thunder Bay, ON; several nieces and nephews.  Besides his parents, he was predeceased by four sisters, Edna Kierstead, Marion Currie, Doris Cody and Minnie Banks; nine brothers, Leonard, Henry, Kenneth, Ralph, Frederick, George and infant twins, Douglas and Donald and baby Phillip and by an infant grandson, Angel Bell Harding.

The family would like to express their gratitude to The Berkeley Bedford; and the incredible staff at the Emergency Department and on 3 West at the , and also the staff at ’s for their loving care and compassion.

Interment will take place in , at a later date.  In lieu of flowers, remembrances may be made to the Dartmouth General Hospital Foundation or the . Personal condolences may be offered through www.yorkfh.com

Look inside to read what others have shared
Family and friends are coming together online to create a special keepsake. Every memory left on the online obituary will be automatically included in this book.
View Tribute Book
Share Your Memory of
Stewart
Upload Your Memory View All Memories
Be the first to upload a memory!
Share A Memory
Send Flowers