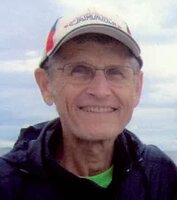 CLICK HERE FOR THE LIVE STREAM OF THE SERVICE

It is with great sadness that we announce the passing of a beloved husband, father, grandfather, and friend. John passed away unexpectedly at the DECH on the afternoon of April 2nd, 2022.  John was predeceased by his parents Donald and Eleanor (MacIntyre) McLean, paternal grandparents Roy and Jenny McLean, maternal grandparents Angus and Olive MacIntyre, Uncle Doug and Aunt Viola McLean, and Uncle Bruce and Monte McLean.

John was an only child, born in London, Ontario on September 26th, 1951. He leaves behind his wife of 38 years, Valerie "Val" McLean, daughter Elisabeth "Beth" (Andrew) Blair, son Nathaniel "Nat" (Gabrielle) McLean, granddaughter Olivia and soon to be granddaughter "Little T", cousins Dave (Deanna) McLean and Janice (Dave) Newcombe, as well as many friends and his church family at the Lincoln Baptist Church.

John held many different jobs over the years, but above all else the one he took most seriously, and enjoyed the greatest, was sharing the love of Jesus to everyone he met.
He attended Central Pentacostal College in Saskatoon SK and obtained a degree in Theology.  For many years John worked as an interpreter for the deaf. He later worked as a Human Service Counselor, and most recently served as an Assistant Pastor at The Lincoln Baptist Church.

John was a man of few words, but the words that he did say were worth listening to. He had a quiet presence, but the legacy that he left behind was loud, and he made a lasting impression on the lives of many people from all walks of life. John had a heart for those less fortunate, and spent many hours ministering to the homeless on the streets of Fredericton.  John was a writer, and most recently enjoyed writing his daily blog "Pressing On". He would write letters every Christmas for everyone in his immediate family and place them in their stockings. A keepsake they will cherish always.

He may have often come across as a very serious man, but every once in a while you'd see that little smile crack on the side of John's mouth. He had a unique sense of humor and a quick wit. He loved a good play on words and a silly joke.  John also loved spending time in God's creation. He was an avid runner in his younger years, and enjoyed going for walks. He was a fan of comic books, Sci-fi, and superheroes. He enjoyed watching old movies and Murdoch Mysteries with Val.The family would like to thank the EMS team, ER, and DECH staff for their kindness and care for the brief time that John was with them, as well as a good Samaritan named Joshua at the Burger King in Fredericton.

In lieu of flowers, the family asks that anyone who wishes to make donations do so to the Fredericton Homeless Shelters or similar charity in support of the Homeless community of Fredericton.

Arrangements have been entrusted to York Funeral Home in Fredericton. There will be no visitation. A funeral service and celebration of life, with reception to follow, will be held on Friday April 8th at 2:00 pm at The Lincoln Baptist Church located at 2275 NB-102 in Lincoln NB with Pastor Richard Adesola officiating. As per the family's wishes, masks and social distancing are not mandatory, but they ask that those attending be mindful of the preferences and comfort of others in attendance.  Pallbearers for the service will be Del Jenkins, Marshal Gaudet, Dan Dairo-Singerr and Neil Noble.  The service will be live streamed for those who wish to participate virtually. Please come dressed in whatever you are comfortable in, just as John would have wished and done himself.  Personal condolences may be offered through www.yorkfh.com

For those that are interested, here is a link to John's current blog, "Pressing On" and his previous blog "The Broken Runner", which can also be found on this site.

John made a point to leave behind two specific blog entries that were especially important to him- 3/25/19 and 4/24/19. They can be accessed in the archives with this link.

Phillipians 3:14 "I press on toward the goal to win the prize for which God has called me heavenward in Christ Jesus."

Press on folks! Keep your stick on the ice!