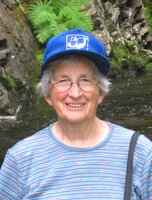 With great sadness we announce the sudden passing of Margaret “Peggy” Patricia (Pond) McKay, wife of Harland McKay at her home in Hayesville, on Wednesday, February 9, 2022. Born on December 29, 1940 in Porter Cove, NB, she was the daughter of the late Richard and Annabelle (O'Donnell) Pond. Peggy was a lover of nature, gardening, fishing, camping and country music. She always enjoyed working in her vegetable garden. She was a member of Boiestown United Church.

Besides her parents, she was predeceased by an infant brother, James Pond and sister-in-law Eva Fowler.

Arrangements have been entrusted to the loving care of York Funeral Home’s Miramichi Valley Chapel. At Peggy’s request, there will not be a visitation or funeral service. A Graveside Service will be held in Bloomfield Ridge United Church Cemetery, at a later date. For those who wish, remembrances may be made to Bloomfield Ridge United Church Cemetery Fund. Personal condolences may be offered through www.yorkfh.com