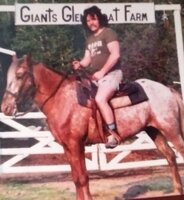 The passing of Michel Joseph Archer of Stanley, NB, husband of Viola (Newman) Archer, occurred on January 1, 2022 at Dr. Everett Chalmers Regional Hospital.  Born on May 11, 1950 in Bathurst, NB, he was the son of the late Edward and Jeannine (Lussier) Archer.  Michel enjoyed gardening, horse back riding, dog sledding, four wheeling and spending time outdoors.

Michel is survived by his sons, Jacob Archer and Kyle Archer; daughter Kailee Archer (Chris Wood); brother Denis Archer (Karla); grandchildren, Adria, Quinn, Nolan and one on the way; several nieces and nephews. He was predeceased by his brother Richard and sister Dianne.

Special thank you to the doctors and nursing staff of 3SW for the care they provided during Michel’s time in the hospital.

In keeping with Michel’s wishes there will be no visitation or service. For those who wish, remembrances may be made to the New Brunswick Heart and Stroke Foundation, Canadian Diabetes Association, New Brunswick Kidney Foundation or to a charity of the donor's choice. Personal condolences may be offered through www.yorkfh.com