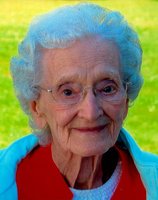 The peaceful passing of Elizabeth “Betty” (Campbell) Sewell of Fredericton, NB, wife of the late Herbert H. Sewell occurred on Sunday, December 29, 2019 at York Care Centre, Fredericton, NB. She was surrounded by people who loved her. Born July 29, 1917 in Ripples, NB, she was the daughter of the late John R. and Lillian B. (Young) Campbell. Betty was a Genealogist with the NB Provincial Archives and was a member of Grace Memorial Church for over 50 years, as well as an Eastern Star for over 60 years. She was bestowed an honorary life membership with the Provincial Archives of NB and was an honorary life member of the NB Genealogical Society. She was a proud United Empire Loyalist. Betty is survived by her daughters, Patricia MacMurray of Fredericton, NB and Linda Kennedy (Brian) of Markham, ON; grandchildren, Dr. Celynn Klemenchuk (Frank) , Michele George (Olaf), Tara, Brynne and Joseph Kennedy (Jamie); three great-grandchildren, Andrew, Cole and Alex; cherished sister, Rhoda Holliday of Regina, SK; several nieces and nephews. In addition to her parents and husband, she was predeceased by her sister, Reva Larlee; brothers, Clifford and Reid Campbell; great-granddaughter, Kailey; son-in-law, Rob MacMurray. Visitation will take place at York Funeral Home, 302 Brookside Drive on Wednesday January 1, 2020 from 6-8 pm. A Funeral Service will take place from York Funeral Home’s T. Gordon MacLeod Memorial Chapel on Thursday, January 2, 2020 at 2 pm with Rev. Dr. Marilyn McCormick officiating. Members of the Celestial Chapter # 3 O.E.S, Fredericton, NB are asked to assemble at 2 pm for an Eastern Star Tribute Service. Interment will take place at the Fredericton Rural Cemetery at a later date. In lieu of flowers, remembrances may be made to Grace Memorial Baptist Church (Ferne Sewell Chapter). Special thanks to York Care Centre for their exceptional care and compassion shown to Betty and her family. Personal condolences may be offered through www.yorkfh.com